Day 2: Somewhere over Europe to Frankfurt to Zurich to Lucerne

About an hour before we started our descent into Frankfurt, the cabin staff woke us to eat “a light continental breakfast” – translation – a piece of plastic wrapped sweet bread of some kind and a glass of juice. I think most of us would rather have had the extra sleep…

Once on the ground in Frankfurt we made our way to customs where we met quite possibly the most disinterested customs agent in the entire western world. I don’t think he even looked at the picture in my passport (that would have required him to lift his head after all) and he did not speak a work to any of us as we made our way through his station. Apparently we weren’t the only ones feeling a bit rough at that time of the morning. After clearing customs we made our way through a maze of hallways and walkways before finding ourselves having to go back through security screening. These folks were definitely amongst the most thorough I’ve ever seen and it took a fair while for us all to get through (I think 3/4s of us got wanded and/or patted down for one reason or another). From there we walked a few kilometres (probably not but it sure felt like it) and made our way up and down a few levels before arriving at the departure area where we needed to wait for them to figure out what gate we’d actually be departing from. So we picked the closest gate to the departures screen and settled in for a couple of hours wait. Time passed very, very slowly… Unbelievably, some of the kids thought that it would be a good idea to eat hotdogs for breakfast. It was disgusting to witness.

Eventually they put up our departure gate (turned out we were only 2 gates away) so we headed over to the correct gate and settled down for another 1/2 hour or so before the flight to Zurich boarded. By this point most of our group was looking pretty bedraggled with some people having been up for more than 30 hours with minimal/no sleep on the plane. When it came time to board, we shuffled aboard looking more like convicts being shipped to Devil’s Island than travellers starting on an epic journey to Europe.

This flight was only about an hour long and I think all of us slept through the entire flight. I actually don’t recall the plane taking off… That has never happened to me before. I seem to recall being woken up briefly by the cabin attendant serving a packaged cookie of some kind but other than that there’s not much to report about the flight… Once on the ground we headed to the baggage claim area to see if all of our luggage had arrived… Kudos to Air Canada – through three flights and two different airlines, all of our luggage arrived with us. With Air Canada that is nothing short of miraculous. We quickly changed into some fresh clothes – or at least some of us did – others stayed in the same clothes they’d worn for more than 24hours straight… it was pretty easy to tell who those people were… After “freshening up” we headed for the exit where we met up with our Tour Director – Frank – who will be accompanying us for the duration of our trip. He looked fresh and well rested and was full of energy and enthusiasm… We were not a particularly receptive audience.

Once we got the kids loaded on the bus, the group leaders met with Frank to discuss the plans for the day. We decided that we would head into Zurich proper for a quick walking tour and to grab something to eat and then head to Lucerne where we would do a quick walking tour before heading to our hotel for dinner. This plan would free up a couple of hours of free time for the kids in Lucerne the next day and would give us something to do until our rooms were ready at the hotel.

So off to Zurich we went. I’d love to say that Zurich was amazing but the truth was that most of us were still too tired/jetlagged/exhausted to really appreciate it. We walked a bit through the old town area – with many of our group (the other group is from Toronto so they were able to sleep in on their departure day… we hate them a little for that) trudging along like soldiers coming back from the frontlines. After the brief walking tour, we had about an hour and a half of free time so everyone scattered to find something to eat. To say that Zurich is expensive would be a massive understatement… A BigMac was apparently going for 11.70 euros (that’s about $17cdn!). A donair was going for 10 euros (about $15cdn). A slice of pizza from a supermarket deli was 6.80 euros (over $10cdn). We did not eat much… While the kids ate pizza and burgers (clearly they have better paying jobs or their parents love them very much) Marie and I ate a couple of yogurts (2 euros each!)… We also managed to poke our heads into a pretty cool old cathedral (albeit quite austere inside in keeping with its history as the seat of Zwingli’s protestant reforms) and wandered for a bit along the riverfront. It was very pretty.

We met back up at the meeting place (everybody was on time!) and headed back to the bus to make the trip to Lucerne. The drive to Lucerne took about an hour and I don’t think anyone in our group saw a bit of the scenery as the vibration of the bus coupled with almost no sleep put everyone out as soon as their butts hit the seats. Frank tried to pass along some history of Switzerland along the way but gave up when it became clear that almost no one was left awake to hear him.

When we arrived in Lucerne, most of the kids woke up as soon as Frank started talking. One kid, though, (who shall remain nameless) actually made me think he might have died during the bus ride… His seat mate poked and even slapped him (3 times!) and the kid across the aisle gave him a couple of good hard shakes… Still nothing. I was actually thinking I should get up and check to see if he had a pulse when he woke up looking completely and utterly lost… His reaction to the news that we were getting off the bus to do some walking was not appropriate for a family oriented blog… We staggered around behind Frank to the Lion Monument (a very impressive monument to the Swiss soldiers who were killed defending Louis XVI and Marie Antoinette during the French Revolution). Mark Twain once described this as the most moving monument in Europe… I’m not sure our group was conscious enough to fully appreciate it but it is a very striking sculpture. In addition to the obvious dying lion, if you look at the outline of the carving it’s supposed to be a hog (the ear is just below the H) – apparently the sculptor’s not so subtle message to the French… Or perhaps to the people who commissioned the sculpture and didn’t pay him…

After the Lion Monument we walked a bit more to Chapel Bridge (the iconic covered wooden bridge that Lucerne is famous for) and an impressive baroque Jesuit cathedral (one of the few Catholic cathedrals in Switzerland). The original chapel bridge dated back to the middle ages but burned down in the early 1990s but has been carefully reconstructed (albeit without the original painted triangles under the roof trusses). By this point people were a bit more perked up and were able to appreciate the magnificent natural setting of Lucerne with its lakefront and mountain backdrop. After the cathedral we made our way back across Chapel Bridge to our bus pickup spot. We had enough time for people to make a quick pit stop in the Rolex shop (their bathrooms are open to the public for some reason) before boarding the bus for the hotel.

The drive to the hotel (in nearby Hasliberg) took about an hour and was through some very spectacular mountain scenery. Once again, virtually no one saw it as they were sound asleep. As soon as we arrived at the hotel (more of a ski lodge actually) we took a couple of minutes to appreciate the beautiful setting, figured out who was in which rooms and headed to our rooms to dump our gear and “freshen up” – something of a wasted effort as we were all pretty dead on our feet by this point. Fortunately we only had to wait about 20 minutes for dinner (tomato soup starter, salad bar and a homemade burger with potatoes). The food was actually very good but we weren’t really able to do it justice as most of our group was too tired to eat much and some people bailed out after the first course and headed off to bed. Everyone in our group was done dinner and off to bed by 7:30 or so…

Despite being up for almost 30 hours (and some being up for more than 40) with little or no sleep, our group were troupers and conducted themselves admirably. While there were a few moans and groans (and even the odd whine or two) they were enthusiastic, polite and punctual… and despite the utter exhaustion, seemed to enjoy their time in Lucerne especially and are looking forward to their first full day on tour tomorrow. 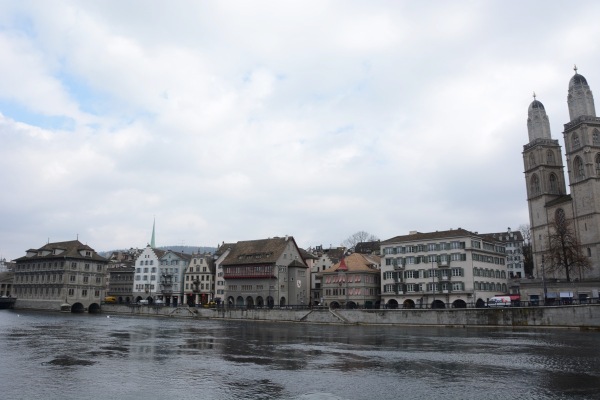 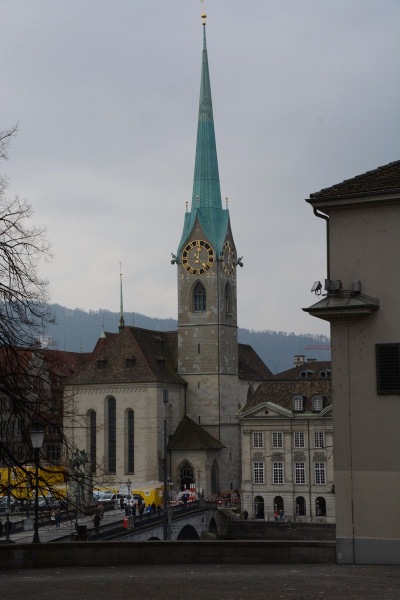 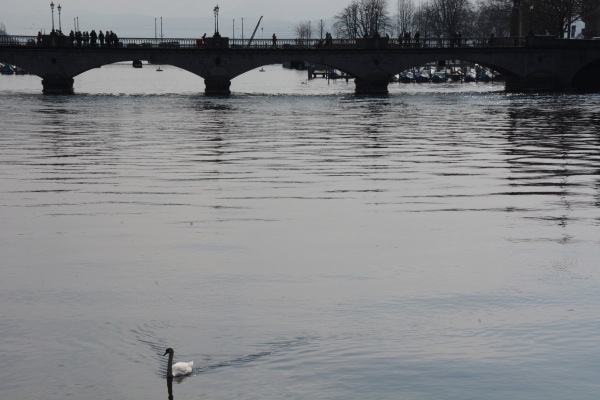 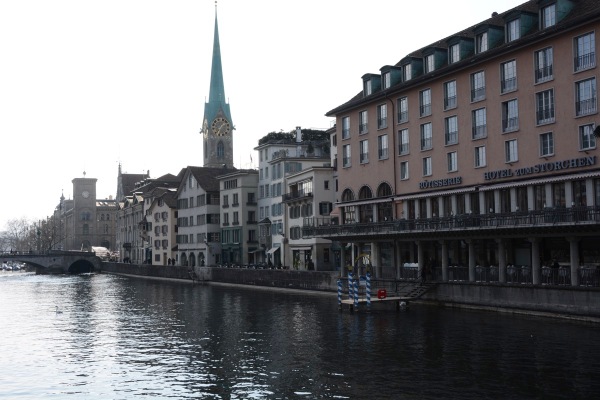 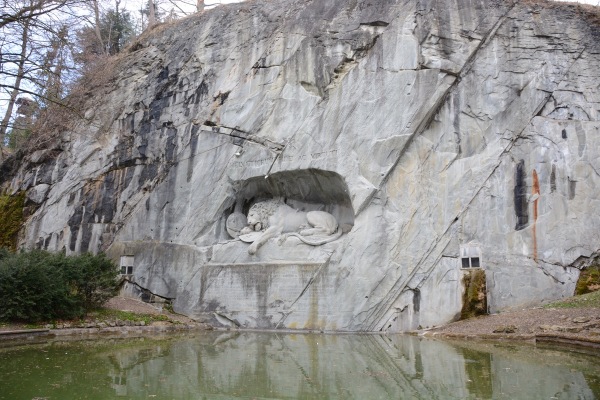 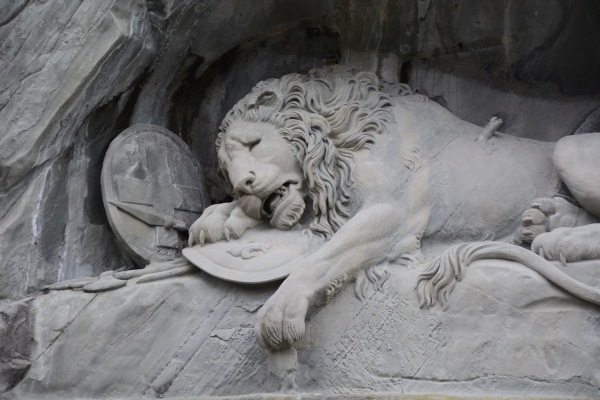 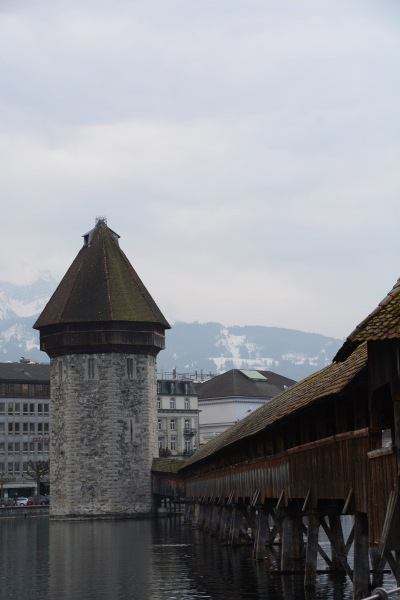 One thought on “Day 2: Somewhere over Europe to Frankfurt to Zurich to Lucerne”